I’ve peeled back one more layer on understanding a little bit of Namibia, and maybe a little more about myself. Monday of last week (1 Aug), I left for my first vacation since arriving here. Probably overdue, but for sure due. I was getting a little crabby.

First: the facts. (Impressions and thoughts will come after the itinerary.)

1 Aug: The rental car (a Toyota Corolla) was filled up with stuff and I took off (on the left side of the road) to visit the South in Namibia. Right away that was a little unusual. Most people, volunteers and Namibians alike, go to the North. Spent all day driving due South to Keepmanshoop, then West and stopped in Bethanie (ba – ta – ne) to visit a friend and fellow PCV. She’s been there almost a year, and I was her first visitor! You have to want to go there – it isn’t on the way to anything!
Link to Bethanie photos on the web: Bethanie Photos

2-3 Aug: Left Bethanie and drove to Luderitz on the coast, where I stayed two nights and one full day with another PCV friend, again, the first visitor he’d had. People do go to Luderitz for the Crayfish (lobster) Festival, but he’s only been there about two months. That is a BEAUTIFUL town! Reminds me of Sausalito. I also walked through Kohlmanskop, the “ghost town” that was a small but thriving Diamond Mining community until about 1944 when Diamond Mining operations moved to Oranjemund due to much larger gem quality diamonds being found there.
Link to Kohlmanskop photos on the web: Kohlmanskop Photos
Link to Luderitz photos on the web: Luderitz Photos

4 Aug: Left Luderitz and drove to Rosh Pinah, then had a permit to take the road to Oranjemund. It’s an 80 km drive, only ½ of it (the southern half) is paved. The first part is gravel/under construction. Oranjemund is a “closed town”, until recently completely owned and operated by Namdeb, the diamond mining company that is owned by Namibia and DeBeers. Literally the entire town was owned – and all housing, food, utilities, streets, etc. were provided by Namdeb to house employees free of charge to the employees (kind of a modern day Kohlmanskop – see above). It was recently given back to the Namibian government but is only now starting the transition to start being a self-sustaining town. More on this later. On the way out of Oranjemund, I came close to hitting a wild Ostrich running across the road with a couple of its friends. Also saw LOTS of Oryx wandering around within the city, and heard an Hyena “laughing” in town about 02:00 AM one morning. A jackal was running around one evening while I was touring the city. Wildlife is pretty common in Oranjemund!

5-8 Aug: In Oranjemund, meeting people and attending the Diamond Jubilee, a fund raising dinner for the Diamond Festival in November. Guest speaker with Former President of Namibia Hifikepunye Pohamba. Details on the Oranjemund visit below.
Link to Oranjemund photos on the web: Oranjemund Photos. 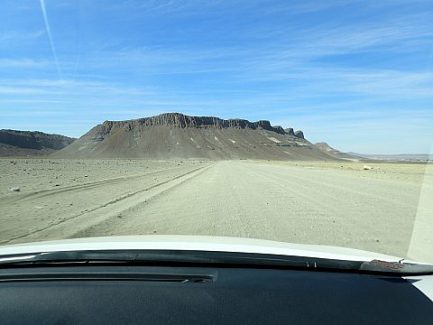 Plateau on C13 enroute to Ais-Ais turnoff. Note patches of granite protruding from the scree below the plateau cliffs. 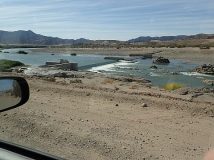 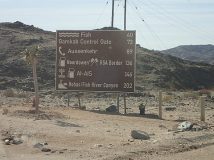 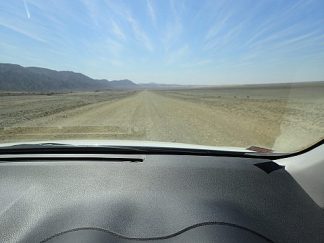 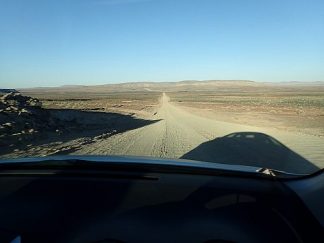 10 Aug: Left Hobas and drove all the way through to Windhoek. Several hours of nothing but gravel roads and desert, then a quick cut East on the B-4 back to Keetmanshoop and then North to Windhoek. Back at Penduka that night.

Impressions, thoughts, and miscellaneous musings along the way.

The land area of Namibia is 823,290 sq km, population about 2.2 million (depending on where you look for information – it is not clearly defined). That’s 2.67 people per sq km.

How does this relate to my trip? The parts of South West Namibia I drove through reminded me a lot of the Southwest in the USA, but bigger and emptier. At one point on Tuesday, I drove over two hours on a gravel road in the middle of the desert without seeing another building, person, or even a vehicle going in either direction! It started to make me nervous – thinking about what would happen if the car broke down!

But for some reason, the combination of high technology with low tech subsistence living hit me most clearly while driving through hours and hours of flat, featureless landscape with occasional microwave telecommunications towers. VERY high tech in the middle of vast expanses with people that know how to get water from desert plants, but with no idea of how even a toaster operates. The juxtaposition was striking.

I find in my work here that two things live simultaneously in my awareness:

Finally, and back in line with the original point, it is WAY too easy to try and describe “them” when they are as diverse as are people in the United States, or anywhere. Are there some things that seem to be common? Sure. But if you ask me “What is Namibia like?” I would have as much trouble describing it as you would to describe “What is the United States like?” if you compare the Ozark mountain people to the inner city slum dwellers to the kids in an elite University to the scientists at MIT. It’s just not that simple. I begin to see why re-integrating into the United States is said to be WAY harder for Returning Peace Corps Volunteers than integrating into the Host country at the beginning of service. It’s not simply described in terms that people have a background to understand. I struggle with that here, as do all PCVs. The few PCVs I know here that don’t adjust well to it are usually the ones that continue to apply our USA cultural expectations to living here It just doesn’t work that way.

The town population is uncertain: something between 4,000 and 15,000 depending on who you talk to. Honestly, no one knows for sure. Namdeb (the diamond mining company that created and owns the town) has a count of the homes they own, but that doesn’t include temporary housing for transients or sheds for the disadvantaged, etc. The individuals I spoke to would all defend their position, but there is no consensus. In some ways, it doesn’t matter practically.

Oranjemund is just beginning the process of transforming itself from a completely owned and paid housing project by Namdeb for their employees, to becoming a real municipality that is self-sustaining. The legal and social, and economic, issues are HUGE! And fascinating. There is some chance I would be moved to Oranjemund by the Peace Corps when my time at Penduka is over, and I would welcome that.

Oranjemund is just over 100 years old, and until about a year or two ago was completely shut off – only access granted to Namdeb employees. When the road to Rosh Pinah is completely paved (sometime next year), the access point controls will probably be lifted and it will become a publicly available area. The Town Council and the Namibian Chamber of Commerce and Industry in Oranjemund are striving to make that transition work. The implications are WAY too complex to get into in this blog, but I found it, and the people, to be fascinating and a marvelous career challenge. I’m sure there will be more on the topic of Oranjemund in future blogs.

By and large, I try not to always compare prices here to the equivalent price in the USA at the current exchange rate – which is very advantageous to the USA. The price structure here, in Namibian Dollars, must be the determining factor when shopping for bargains and trying to save money.

HOWEVER, once in a while something “shows up” to demonstrate just how much the dollar difference helps when we look at US dollars to Namibian dollars. .

This photo is of some meat I purchased on Thursday from Hartleif, the largest Abbatoir (slaughter house) in Namibia. Total price, and this was from an expensive store, N$372.83, which is $27.78 USD. I LOVE this country! The steaks are very thick and wonderful, and all of the protein here is very high quality. Fortunately, I like a protein diet. My vegetarian friends are challenged here!

Yes, I know Red Meat is probably the biggest contributor to global warming – really it is – and I am very conscious of choices that affect that. But once in a while I splurge and don’t feel too badly about it. I’m very aware that we should do as much of it as we can to minimize that effect.

But the t-bones alone would have cost me more than that in the USA!

I’m going to stop here – this is long enough (probably too long) for one post. Still working to post more often and not as long, but it’s just my nature!

What do YOU want to know about? I’ll do what I can to shed some light on the questions you have. Just post a comment asking. And if you haven’t already done it. “Follow” the blog (lower right corner of your screen). All you get is an email that says I posted a new blog.

PS: A minor “(%&(*” I just added early the next morning before (hopefully) posting. I tried to post this yesterday, and literally spent four hours AFTER writing and getting photos together to try and just get it on the internet. Here at Penduka, particularly, internet is notoriously bad, slow, and undependable – whether using LAN network (connected via microwave to Penduka), or “NetMan” (a dongle-based 3G service). The emotional cost in “almost” getting there then losing everything because the internet just stops is huge  – I finally just give up and watch some brain-candy from my hard drive of entertainment. OK – ‘Nuff of that. I just needed to share!! This is, after all, part of what service is like in Namibia, at least for me.